The table below gives criteria for choosing the most appropriate statistical method.  These methods perform hypothesis tests and are most frequently used to describe the data using univariate tests.  Often multivariable methods are of more interest to the researcher.

In addition to these basic statistical methods it is important to use simple graphs or contingency tables to check for outliers, distribution of the data or correct assignment of categories.

What is Regression Analysis?

Regression analysis is a form of predictive modelling technique which investigates the relationship between a dependent (target/outcome/response) and independent variable(s) (predictor/explanatory). For example, relationship between rash driving and number of road accidents by a driver is best studied through regression.

The key elements of building a regression model: 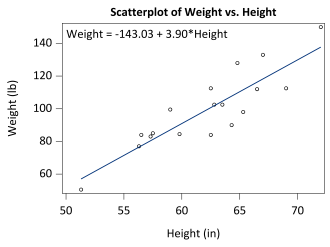 The above model can be interpreted to mean that for every one inch increase in height on average there will be a 3.9 pound increase in weight.

The most common method used to fit a regression line is the Least Square Method. It calculates the best-fit line for the observed data by minimizing square of the errors. Linear regression requires that the dependent variable is a continuous variable and is normally distributed.

When we want to create a model that is suitable for handling non-linear data, we will need to use a polynomial regression. In this regression technique, the best fit line is not a straight line. It is rather a curve that fits into the data points. For example, we can have higher-order polynomial terms in the model something like Y=a+b*Xk. Where Xk indicates the kth-order polynomial term, k=1, 2 (quadratic), 3 (cubic)...

This form of regression is used to select the independent variables with the help of an automatic process. The aim of modeling techniques is to maximize the prediction power and minimize the number of predictor variables. Some of the most commonly used model selection methods are:

Parking: During construction, you may park on the bottom floor of the south parking structure.

Please use the following text to acknowledge the CTSI Study Design and Biostatistics Center: